The total value of the cryptocurrency market opened at $760 billion in 2021 and soared to an all-time high of $2.9 trillion later that year. This year, it has given back nearly all of those gains and sits at about $850 billion as of this writing.

A combination of factors is to blame. Interest rates are rapidly rising, which is damping investors’ appetite for risk, and confidence has been eroded by a series of high-profile failures in the industry. That means some of the most speculative cryptocurrencies are suffering the largest losses right now.

Dogecoin (DOGE -2.87%) was hot during last year’s frenzy, but it has since declined by 86% from its all-time high of $0.74. But the token has found some life this month thanks to one of its biggest supporters. So could 2023 be the year it soars to $1? 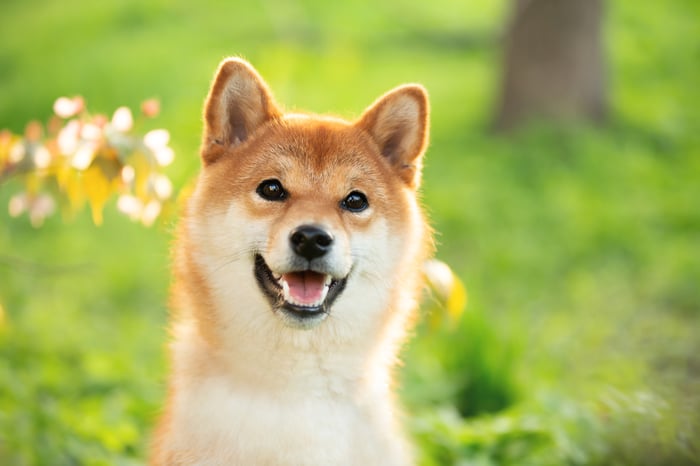 A currency typically needs utility to garner widespread adoption, and widespread adoption is necessary to sustain its long-term value. Dogecoin, like most cryptocurrencies, has never proven its worth as a means of exchange, so just 2,058 businesses accept it as payment for goods and services globally.

But one thing Dogecoin does have going for it is Elon Musk. The billionaire is the head of electric vehicle powerhouse Tesla, and just a few months ago, he famously bought social media giant Twitter. He is also one of the biggest believers in Dogecoin and spent much of 2021 promoting the token on social media.

Musk took things one step further when he appeared on the TV show Saturday Night Live last May, mentioning Dogecoin in a skit. Ironically, that marked the top, and the token’s price has fallen ever since.

But to his credit, Musk is doing his part to drive adoption. Tesla accepts Dogecoin as payment for some items of merchandise, and Musk also takes Dogecoin for his recently released fragrance, Burnt Hair, which sold 30,000 bottles in the week of release.

There is rampant speculation that Dogecoin could play a part in the Twitter ecosystem. Some investors believe Musk will accept the token as payment for Twitter’s blue-check profile verification, and others think Twitter could create a digital wallet that may support Dogecoin.

The likelihood of either event is entirely unknown, but that hasn’t stopped the token’s price from soaring by more than 100% from its 52-week low over the last few months.

Dogecoin’s challenges can’t be overcome by one person alone

The cryptocurrency industry is largely unregulated, and as a result, it’s a breeding ground for nefarious activity. And when things do go wrong, investors have almost no way to recover their funds. That makes crypto very different from cash held in a U.S. bank account, which is automatically insured by the Federal Deposit Insurance Corp. (FDIC) up to $250,000.

Many investors have learned that lesson the hard way this year. Crypto-sector collapses seem to be growing in both size and frequency, with the most recent example being FTX. It was one of the largest exchanges in the world and was plunged into bankruptcy last month in spectacular fashion, owing an estimated $3 billion to its customers. Most of those with assets locked up in FTX are unlikely to ever recoup those losses.

FTX’s failure followed the failure of the TerraUSD stablecoin, which wiped out an estimated $60 billion in value when it lost its peg to the U.S. dollar in May of this year.

What do these stories have to do with Dogecoin? Well, they’ve contributed to the rapid erosion in trust for the cryptocurrency industry as a whole, and since Dogecoin is at the speculative end, that adds yet another hurdle the token has to vault to gain meaningful value.

Dogecoin’s path to $1 is unclear

If Dogecoin reaches $1 per token, the total value of all tokens in circulation would top $139 billion — an increase of more than 10-fold. It’s a more plausible proposition than the same price for a token like Shiba Inu, which would be valued at $589 trillion if it reached $1 per token, but it still remains unlikely.

The bottom line is that Dogecoin won’t rise to $1 without consumers and businesses adopting it as a payment mechanism. It needs to go from being a speculative asset to being one people can spend. Elon Musk can’t carry that weight alone — even though he has a portfolio of highly successful companies.

Next year might offer a more favorable climate for the cryptocurrency markets if inflation continues to fall and if interest rates stop rising, because that will give investors a little more appetite for risk. But it would be a tall order for sentiment alone to send Dogecoin to $1, so I wouldn’t count on it happening anytime soon.

Dogecoin on the Edge of Massive Explosion! Will DOGE Price Reach $1 This Bull Run?

Bears all set to pull DOGE below $0.093, will the support appear? – Cryptopolitan

Dogecoin on the Edge of Massive Explosion! Will DOGE Price Reach $1 This Bull Run?

Bears all set to pull DOGE below $0.093, will the support appear? – Cryptopolitan

The Most Successful Presale Of 2023? Big Eyes Coin Surpasses 20 Million Dollars While Solana And OKB Struggle To Resurge